According to Betty Purchase discipleship is where Scripture Union excels. She explains how she became involved and how she continues to be inspired by the vision...

Betty first heard about Scripture Union when she was working as the Director of Youth Ministry, Camping and Conferencing for the American Baptist Churches in around 1995. “I received a flier for a Youth Conference at Eastern University, with speakers (Samuel Escobar and Tony Campolo) who I really wanted to hear,” she explained. But as she’d never heard of Scripture Union and wasn’t sure what to expect she went home and asked her Pastor husband what he knew about SU.

“His response was, ‘It’s some old Bible Study group from England’. I’ve learned a lot and seen SU in action around the world, since then and completely changed my mind. He changed his opinion, also!”

The conference was excellent quality and well done. Betty said, “I picked up the Encounter and Discovery, and began a new life.”

Reflecting on the organisation’s strengths she said, “Discipleship has been of extreme importance to me. One of the appeals of SU was that as a child my parents became followers of Christ and tried to do ‘what was right’, however, no one had ever discipled them. Scripture Union became the help I needed to focus our family.”

“As I travelled around the Americas Region as part of Scripture Union International, I deliberately invited various grandchildren to travel with me. They had to be at least 14 and earn the money to pay their airfare. The understanding was they had to pitch in to help with whatever was needed.”

“I have 21 grandchildren and they all have a global worldview, a knowledge of Scripture Union from the inside out. They continue to be dedicated prayer partners and I usually send prayer letters on to them. Discipleship through Scripture Union makes a difference.”

Betty’s daughter, Wendy Ziegler writes, “My Mother introduced us to Scripture Union many years ago, and as missionaries in Haïti she always made sure her grandchildren had the children’s material. They learned a lot with Simon and Sarah in the “King’s Street” series and still really enjoy the “Big Bible Challenge”. We are thankful that by doing this she has shown to them how important it is to be exploring daily the stories of the Bible.” 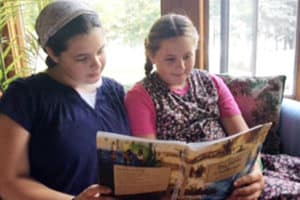